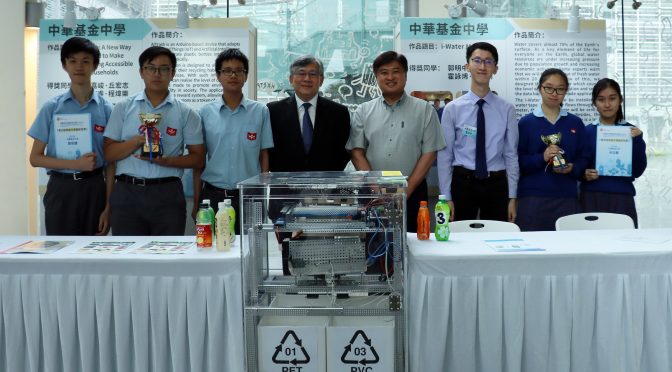 Two teams in our school took part in the Education Bureau Smart City Project Programme 2018/19, a competition which gives students an opportunity to create innovative products for the development of Smart City in Hong Kong.

The senior team invented the product “AITrash”. It is an Arduino device that adopts Internet of Things (IoT), Big Data and Artificial Intelligence (AI) to facilitate plastic recycling in the community. The mobile app is designed to record users’ recycling patterns and redeem points.

The senior team won the “Outstanding Smart City Project Award” (Equivalent to Champion) and was invited to represent Hong Kong in the Tokyo Exchange Tour in late August. The participating students are:

For junior team, they invented “i-water meter”, an intelligent IoT device used to save water. A mobile app is designed, allowing users to keep track of their water use. The team won the “Commendable Smart City Project Award” (Equivalent to Second Runner-up) in the finals and was invited to attend STEM Summer Camp. The participating students are: