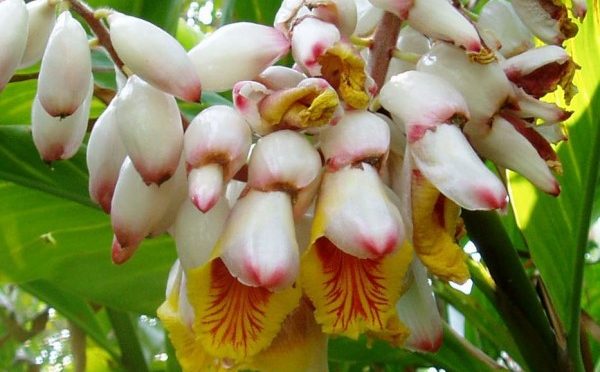 Alpinia zerumbet, commonly called shell ginger is native to eastern Asia. It is a rhizomatous, evergreen perennial that grows in upright clumps to 8-10’ tall. It more typically reaches 4-8’ tall in the greenhouse and 3-4’ tall as a houseplant. It is commonly called shell ginger because its individual shell pink flowers, particularly when in bud, resemble sea shells and its rhizomes have a ginger-like aroma. It is distinguished from other members of the ginger family by the fact that its flowers droop from the ends of leafy stems rather than rise directly from plant rhizomes. Waxy, light pink flower buds open to tubular flowers with yellow inside lips and red throats. Flowers are fragrant. Flowers appear in drooping racemes (to 1’ long) in summer. Lance-shaped green leaves to 2’ long and 5” wide.

The plant’s long leaf blades are used for wrapping zongzi, a traditional Chinese dish made of rice stuffed with different fillings. In Okinawa, Japan, A. zerumbet is known in the local dialect as sannin, or in Japanese as getto. Its leaves are sold for making an herbal tea and are also used to flavor noodles and wrap mochi rice cakes.

Statistically, Okinawan natives who consume a traditional diet that includes shell ginger have a very long life expectancy. Recent research has investigated its effects on human longevity and the phytochemicals that may be responsible. There have also been investigations into its antioxidant and hypotensive properties which may be responsible for its effectiveness in traditional medicine.