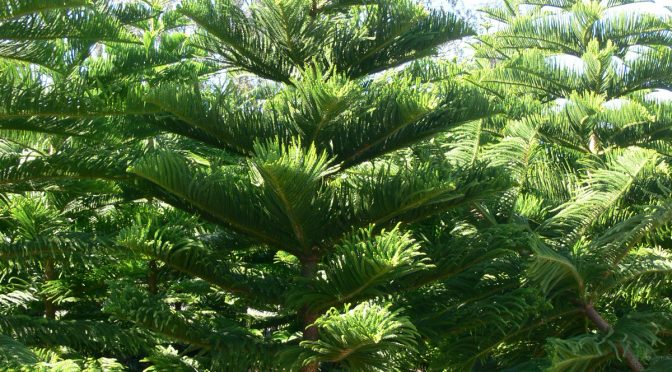 Norfolk Island pine is an evergreen tree with a narrow, elongate, pyramidal crown comprised of regular tiers of short, horizontal, spreading branches; it can grow up to 65 metres tall in its native habitat, but is likely to be much smaller grown elsewhere. The straight, cylindrical bole is usually 40 – 60cm in diameter, with some old trees said to be up to 300cm; there are swellings or small buttresses at the base.

Logging has been a threat in the past. Land clearance and grazing have also been significant threats in the past but are now less problematic. The impact of introduced invasive species has been significant: rabbits, goats and pigs were responsible for the loss of almost all vegetation on Phillip Island while exotic trees such as Psidium cattleianum and Olea europaea ssp. Cuspidata have colonised many areas on Norfolk Island itself to form dense impenetrable thickets. In the 1970s many Araucarias suffered from a dieback that was associated with habitat degradation and adverse environmental conditions. Improvements in land management practices, the introduction of a biological control and the removal of invasive species have led to a lessening of this problem although invasive species are still a major and ongoing threat. The plant is classified as ‘Vulnerable’ in the IUCN Red List of Threatened Species(2013).

The wood is soft. It was at one time heavily exploited for construction. A high quality wood, good for turning, it is used extensively by craftspeople in Hawaii