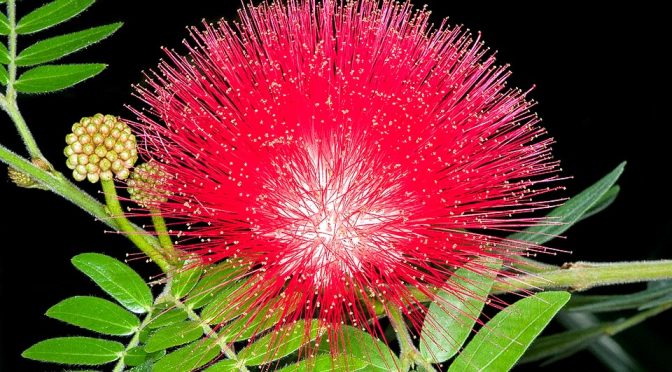 Calliandra haematocephala, commonly called red powder puff, is an evergreen shrub or small tree native to Bolivia. It was formerly included in the legume or pea family, but has recently been shifted into the mimosa family. It typically grows 10-15’ tall in its native habitat and is a very popular flowering shrub in central and southern Florida where it will survive year-round in the ground. Bipinnately compound leaves (5-10 pairs of leaflets per pinna) open copper-pink but mature to dark green. Raspberry-like flower buds open to hemispherical red powder puff flower heads (to 3” across) consisting of masses of scarlet stamens. Blooms primarily in fall and winter, but sporadic additional bloom may occur throughout the rest of the year. Variations in flower color exist, with some pink and white forms being available.

Studies with other species of the genus showed various pharmacological properties: anti-inflammatory, anticonvulsant, immunomodulatory, and antiulcerogenic.

Uses
Folkloric
No reported folkloric medicinal use in the Philippines. In Nigeria, roots used in the treatment of hemorrhoids. Elsewhere, decoction of the flowers used as blood purifier and tonic.