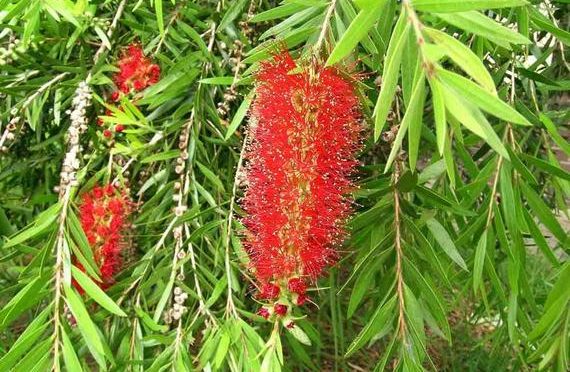 There is ongoing controversy about whether Melaleuca or Callistemon should be used for the bottlebrush species). Some herbaria have now adopted the name Melaleuca viminalis for this species, however, this reclassification has not been adopted in the Australian Plant Census (which is accepted by ANPSA as the authority on Australian Plant nomenclature).

The weeping bottlebrush is typically a small tree with pendulous foliage although some forms are more pendulous than others. It reaches a height of about 10 metres in its natural habitat but is usually smaller in cultivation, particularly in temperate areas where it is an attractive and reliable small tree for street planting. There is also a compact form, known as ‘Captain Cook’ – see below.

The brushes are usually about 70 mm long by 50 mm diameter, bright red in colour and are usually seen in spring and sometimes in autumn. The seed capsules that follow the flowers release the seed annually, unlike most other Callistemon species, where the seed remains in the capsules for many years.