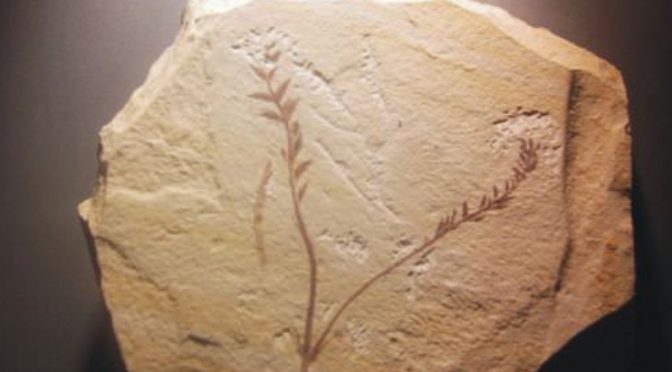 Undisputed fossil records place the massive appearance and diversification of angiosperms in the middle to late Mesozoic era. Angiosperms (“seed in a vessel”) produce a flower containing male and/or female reproductive structures. Fossil evidence indicates that flowering plants first appeared in the Lower Cretaceous, about 125 million years ago, and were rapidly diversifying by the Middle Cretaceous, about 100 million years ago. Earlier traces of angiosperms are scarce. Fossilized pollen recovered from Jurassic geological material has been attributed to angiosperms. A few early Cretaceous rocks show clear imprints of leaves resembling angiosperm leaves. By the mid-Cretaceous, a staggering number of diverse, flowering plants crowd the fossil record. The same geological period is also marked by the appearance of many modern groups of insects, including pollinating insects that played a key role in ecology and the evolution of flowering plants.

Fossil evidence of angiosperms: This leaf imprint shows a Ficus speciosissima, an angiosperm that flourished during the Cretaceous period. A large number of pollinating insects also appeared during this same time.

Although several hypotheses have been offered to explain this sudden profusion and variety of flowering plants, none have garnered the consensus of paleobotanists (scientists who study ancient plants). New data in comparative genomics and paleobotany have, however, shed some light on the evolution of angiosperms. Rather than being derived from gymnosperms, angiosperms form a sister clade (a species and its descendents) that developed in parallel with the gymnosperms. The two innovative structures of flowers and fruit represent an improved reproductive strategy that served to protect the embryo, while increasing genetic variability and range. Paleobotanists debate whether angiosperms evolved from small woody bushes, or were basal angiosperms related to tropical grasses. Both views draw support from cladistic studies. The so-called woody magnoliid hypothesis (which proposes that the early ancestors of angiosperms were shrubs) also offers molecular biological evidence.

The most primitive living angiosperm is considered to be Amborella trichopoda, a small plant native to the rainforest of New Caledonia, an island in the South Pacific. Analysis of the genome of A. trichopoda has shown that it is related to all existing flowering plants and belongs to the oldest confirmed branch of the angiosperm family tree. A few other angiosperm groups, known as basal angiosperms, are viewed as primitive because they branched off early from the phylogenetic tree. Most modern angiosperms are classified as either monocots or eudicots based on the structure of their leaves and embryos. Basal angiosperms, such as water lilies, are considered more primitive because they share morphological traits with both monocots and eudicots.