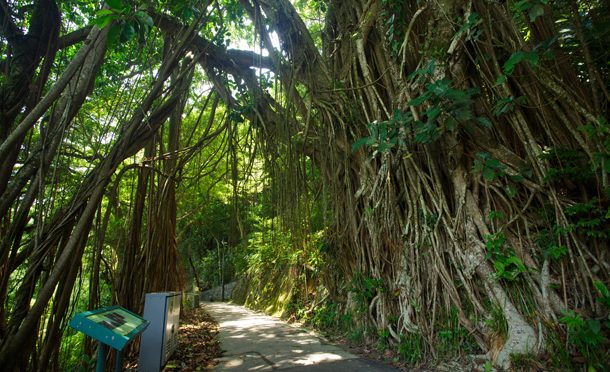 Ficus is a genus of about 800 species of trees, shrubs, scrambling climbers, creepers, and epiphytes which are native to the tropics and subtropics. They are collectively known as fig trees. Ficus is by far the largest genus in the family Moraceae and one of the largest genera of flowering plants. Some of the best-known figs include Ficus religiosa, the sacred fig which is of religious significance in Buddhism; Ficus carica, the common fig which produces multiple fruits that are commercially important; Ficus benghalensis, the Indian Fig Tree which is the national tree of India.

Though members of this genus possess a tremendous diversity of habit and morphology, they are all characterized by bearing a fruit-like body called syconium with hundreds of tiny flowers inside. Syconium is commonly thought of as a fruit but it is actually multiple fruits formed by the tiny flowers inside maturing into a single mass. The bulbous-shaped syconium has an ostiole (a small opening) at the apex, allowing fig wasps to enter and pollinate the stigmas while they lay eggs in some of the ovules. This illustrates another unique characteristic of fig trees: Each species of fig trees is usually pollinated by one specialized wasp species. This mutualistic and close association between fig trees and their fig wasp pollinators is a good example of coevolution.

Fig trees are considered to be the keystone species in many tropical and subtropical ecosystems because their fruits are a major resource for fruit-eating animals such as birds, bats, and primates. Fig trees bear fruit several times a year and different species of fig trees fruit at different time. So there is an all year round production of fig fruits, supplying food to animals that depend mostly on fruit in their diet while other trees are not in fruiting season.