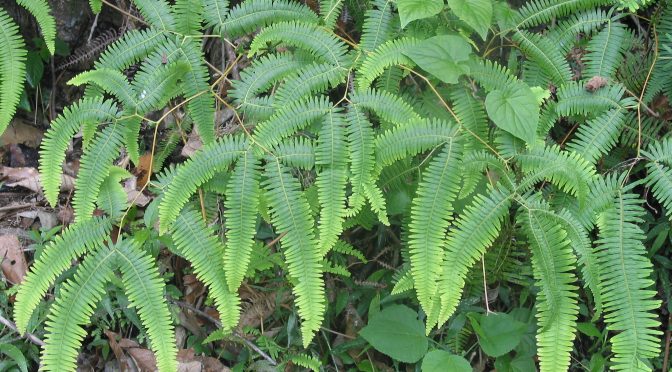 Hong Kong, though small in size, is diverse in its flora. About 2,000 species of vascular plants native to Hong Kong has been recorded. More significantly, a large number of species new to science have first been discovered in Hong Kong. This is attributed to the continued efforts of plant enthusiasts in botanical exploration and their perseverance in conserving the local flora.

Under the Forests and Countryside Ordinance (Cap. 96), damaging plants in any forest or plantation on government land is prohibited. Some rare and attractive indigenous plants, such as Camellia species, Enkianthus quinqueflorus, Impatiens hongkongensis and Iris speculatrix, are specifically listed in the Forestry Regulations to control their sale or possession.

About 38% of the land area in Hong Kong is designated as country parks and special areas under the Country Parks Ordinance (Cap. 208). The AFCD manages the country parks and special areas, within which no new development shall be carried out without the prior approval of the Director of Agriculture, Fisheries and Conservation. Many rare plant populations in Hong Kong are located within country parks and under statutory protection. The listing of Sites of Special Scientific Interests (SSSIs) is an administrative measure to ensure that concerned government departments are aware of the scientific importance of such sites and that due consideration is given to conservation when developments in or near these sites are proposed. There are now 64 SSSIs, a large proportion of which are listed owing to their floristic importance. For instance, Mau Ping at Ma On Shan is listed as an SSSI in recognition of the presence of the largest population of Camellia crapnelliana in Hong Kong.

Various methods, such as seed collection, cutting and air layering, have been used to propagate rare and endangered plants. The seedlings are produced with care in nurseries for planting in their potential natural habitats. Transplantations may also be carried out if their habitats are threatened. Successful examples of propagation include Keteleeria fortunei, Camellia crapnelliana and Camellia granthamiana. The AFCD has also set up the Shing Mun Arboretum for ex-situ conservation. About 300 species including some rare species have been established there.

Besides the vascular plants, more than 300 species of bryophytes and 260 species of lichens are known in Hong Kong. Such a diverse and invaluable local flora deserves our care and appreciation.