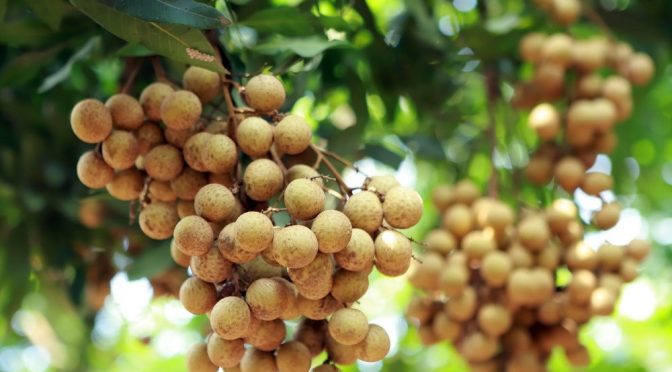 The longan (龍眼, literally ‘dragon eye’), is so named because it resembles an eyeball when its fruit is shelled (the black seed shows through the translucent flesh like a pupil/iris). The seed is small, round and hard, and of an enamel-like, lacquered black. The fully ripened, freshly harvested fruit has a bark-like shell, thin, and firm, making the fruit easy to peel by squeezing the pulp out as if one were “cracking” a sunflower seed. When the shell has more moisture content and is more tender, the fruit becomes less convenient to shell. The tenderness of the shell varies due to either premature harvest, variety, weather conditions, or transport/storage conditions.

The fruit is sweet, juicy and succulent in superior agricultural varieties. The seed and the shell are not consumed. Apart from being eaten fresh and raw, longan fruit is also often used in Asian soups, snacks, desserts, and sweet-and-sour foods, either fresh or dried, and sometimes preserved and canned in syrup. The taste is different from lychees; while longan have a drier sweetness similar to dates, lychees are often messily juicy with a more tropical, grape-like sour sweetness.

Dried longan are often used in Chinese cuisine and Chinese sweet dessert soups. In Chinese food therapy and herbal medicine, it is believed to have an effect on relaxation. In contrast with the fresh fruit, which is juicy and white, the flesh of dried longans is dark brown to almost black.

Longan is commonly found in traditional Eastern folk medicine. This is a common occurrence since, prior to the 1800s, longan was most prevalent in Asia.

In ancient Vietnamese medicine, the “eye” of the longan seed is pressed against snakebites to absorb the venom. This was ineffective, but is still commonly used today.