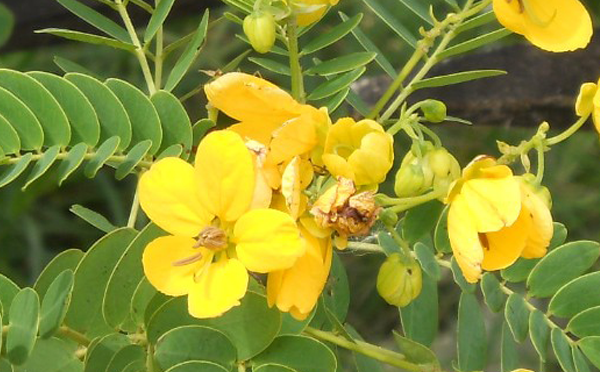 S. surattensis is a small tree which is listed as an ‘agricultural weed’, ‘environmental weed’, ‘cultivation escape’, ‘garden thug’, ‘naturalised’ and ‘weed’ in the Global Compendium of Weeds. It is known to shade out forages in mesic pastures and has a history of repeated introductions outside of its native range. However the species has been spread primarily by human cultivation rather than by seed dispersal, as its pods lack pulp and its seeds are not well adapted for dispersal by biotic or abiotic factors. A risk assessment conducted by PIER (2014) called for further evaluation of the species’ invasiveness and risk of introduction. It is currently classified as an invasive species in several Asian and Pacific countries including Singapore, Taiwan, French Polynesia, and Micronesia, as well as Hawaii.

S. surattensis has escaped from cultivation to roadsides, pastures, and waste places at lower altitudes and is quite common in urban and semi-urban areas. In Southeast Asia, the species favours teak forests and marshy soils, up to 300 m. The species is often used as a hedge plant and shade tree in plantations and cultivated areas. In Hawaii, it has been reported to also grow in volcanic areas and coastal forests.

Several caterpillars and insect species predate upon S. surattensis as a larval food plant. These include Catopsilia scylla and Catopsilia pomona, which eat both young and older leaves of S. surattensis; Eurema blanda silhetana, which only feeds on the young leaves; and Oecophylla smaragdina (red tree ants), which will prey on almost any living creature including butterfly larvae and pupae, and often build their nests on S. surattensis plants.