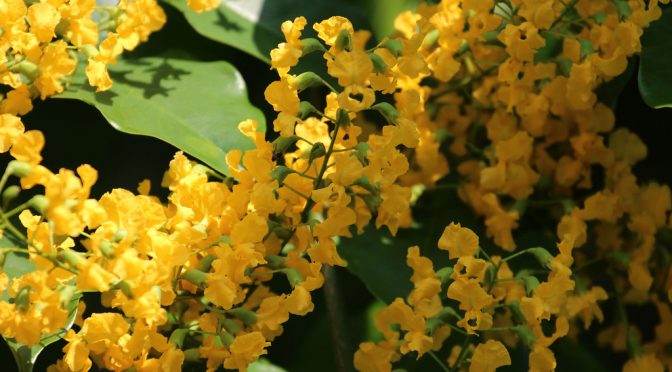 Pterocarpus indicus is a large evergreen to deciduous tree with a large, spreading crown of many long branches that are at first ascending, but eventually arch over and sometimes droop at the ends. The plant usually grows 15 – 20 metres tall, but exceptionally can be up to 40 metres. It has a short, clear bole that can be 2 metres in diameter but is usually of poor form – twisted and deeply fluted, often with pronounced buttresses.

The tree produces sweet-scented yellow flowers that are produced copiously in panicles and racemes. The colourful wood ranks among the most valuable woods in the world and the tree is widely harvested for timber. It is also one of the most widely planted ornamental and shade trees in the tropics, where it is often used as a street tree. The national tree of the Philippines, it flowers gregariously, the whole crown becoming as though painted yellow.

Traditionally, the wood has been so much in demand for cabinet class furniture that nearly everywhere its existence in the wild is precarious. Subpopulations have greatly declined in the wild because of overexploitation, and sometimes illegal exploitation, of the timber, as well as from increasing general habitat loss. It has become extinct in parts of its range. The tree has been classified as ‘Vulnerable’ in the IUCN Red List of Threatened Species(1998).