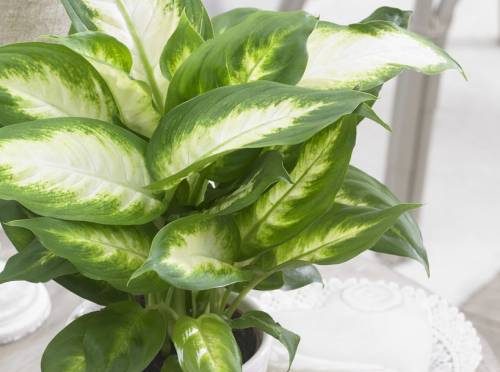 Dieffenbachia is a genus of tropical flowering plants in the family Araceae. It is native to the New World Tropics from Mexico and the West Indies south to Argentina. Some species are widely cultivated as ornamental plants, especially as houseplants, and have become naturalized on a few tropical islands.

Dieffenbachia ‘Camille’ is an evergreen perennial cultivar with large, oval leaves which are attractively marked with dark green at the edges, fading to white in the centre. Also known as Dumb Cane, this references the plant’s poisoning effect, which if ingested, can cause a temporary inability to speak. This cultivar typically grows to over around 80cm high and produces foliage measuring around 40cm long. Long periods of bright sunlight may damage the foliage – this plant does best in partial shade, having originated from tropical forest habitats in North and South America and the West Indies. Flowers are borne on erect spikes, surrounded by cream-green spathes. They may appear at any time of year, though are rarely seen in cultivation.